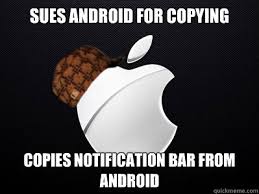 As it is no surprise IOS 7 was announced at the WWDC and what they claimed as “revolutionary” looks like a knock off from Android. Apple was always behind when it came to software and features. Now it looks like Apple has Borrowed or Stolen Features from Android. I will show you some of the features. Some of these are software related such as Apple Safari, and others are features of the actual phone.

These two lock screens are nearly identical, and as you will notice Apple has changed the clock on the screen to match that of Androids.

These two multitasking menus look very similar, and one thing I don’t like about IOS 7 is that it labels the apps below with their corresponding images. However, some people will really appreciate this, as it is might be easier than that of the Android labeling.

4. Apple’s Music Interface Is Now Very Similar to that of Androids

This is the one that I feel was done on purpose without a doubt. When you look at the current tabs, and see the difference and then look at Google Chrome, you will see that they are copies of eachother.

Apple has now developed a sync for all of your passwords so that you wont need to reenter then on your phone.

There are now dynamic backgrounds for IOS 7. This attempt of “innovation” was another copy from that of Android.
9. Automatic Updates

Finally Apple has added the feature for you to automatically update all of your apps, and use the exact same settings as an Android device.
Summary
As we can see these are examples of Apple “borrowing” ideas from Google. However, if Apple can sue over the way a phone looks, then Google can sue for blatant attempts of the copying their software.
Tags: Review
Previous Post

Scott has always been a tech enthusiast and has a knack for explaining difficult concepts in an easy to understand way. When he isn't writing our articles for our site he can be seen gaming on his ultrawide display which he refers to "pc master race mode".

How To Enable Back & Home Buttons On Pixel 4 XL

What Is RPKI & Is Your ISP Safe?

How To Force 90 Hz Refresh Rate On Pixel 4 XL

Why I Switched From Amazon Alexa, And You Should Too

How To Factory Reset Google Chromecast

How To Uninstall A Linux App On Chromebooks

How to Install Minecraft On A Chromebook

How To Pair Your Pixel Buds With Your Chromebook

How To Brighten Your Backlit Keyboard On Chrome OS

No Result
View All Result